I had an idea for using the stitches made when doing a pamphlet stitch as "holders" for LEDs in a very basic circuit. I wondered, however, if the holes made when stitching and/or the thread itself would compromise the circuit. 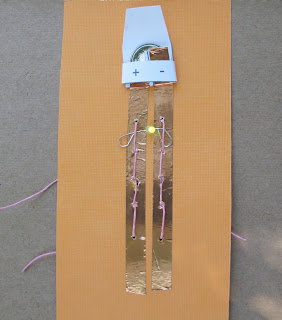 I made a sample with the copper tape on just one sheet of paper and sewed a five hole pamphlet stitch pattern on it. I also tore some holes due to using the same force I usually use when sewing a book to tighten the slack, not thinking that I'm only going through one sheet of paper. Yikes! But this is what happens when one is impatient. 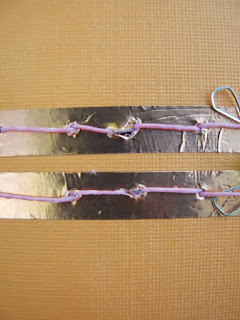 Giant hole due to eagerness in scientific exploration.

However, I figured if it worked like this, it would work when sewn neatly and if it didn't, I could try again. I grabbed the battery and crossed my fingers. Success! On to making a book!

I needed to make a prototype book. I have a bigger project in mind but it hinges on this book structure. I decided to make it small, about the size of the paper model. After a couple false starts of 1: not allowing for thickness of the battery and 2: cutting the battery opening too large, I ended up with this: 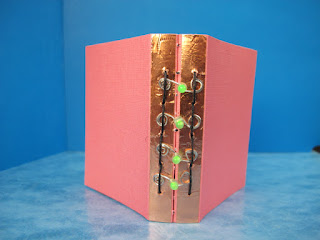 I know it's hard to see but the LEDs do light up.

There are some issues, though, that I need to work on. 1: There isn't enough contact with the LEDs on the spine when the book is closed. 2: I need to work on shaping the leads on the LEDs, maybe cutting them before curling and/or bending the legs at a right angle before curling. Working on 2. should help with 1. I'll also try backing the spine with a piece of card stock to make it stiffer.

Although it's nice when things fall into place right from the start, I also enjoy the problem solving aspect of making books. It's true you learn from your mistakes and that knowledge helps in other projects as well.