I have been privileged to be a participant in Maker Faire Detroit since it began in 2010. In 2012, I wanted to continue with making a community art project, as I had with The Purl Street Scarf Project and Flower Power (in 2010 and 2011, respectively), but with a bookbinding theme. You can see pictures and read about the process at the blog set up strictly to communicate these projects at The Purl Street Scarf Project. However, so you can see the final product of each: 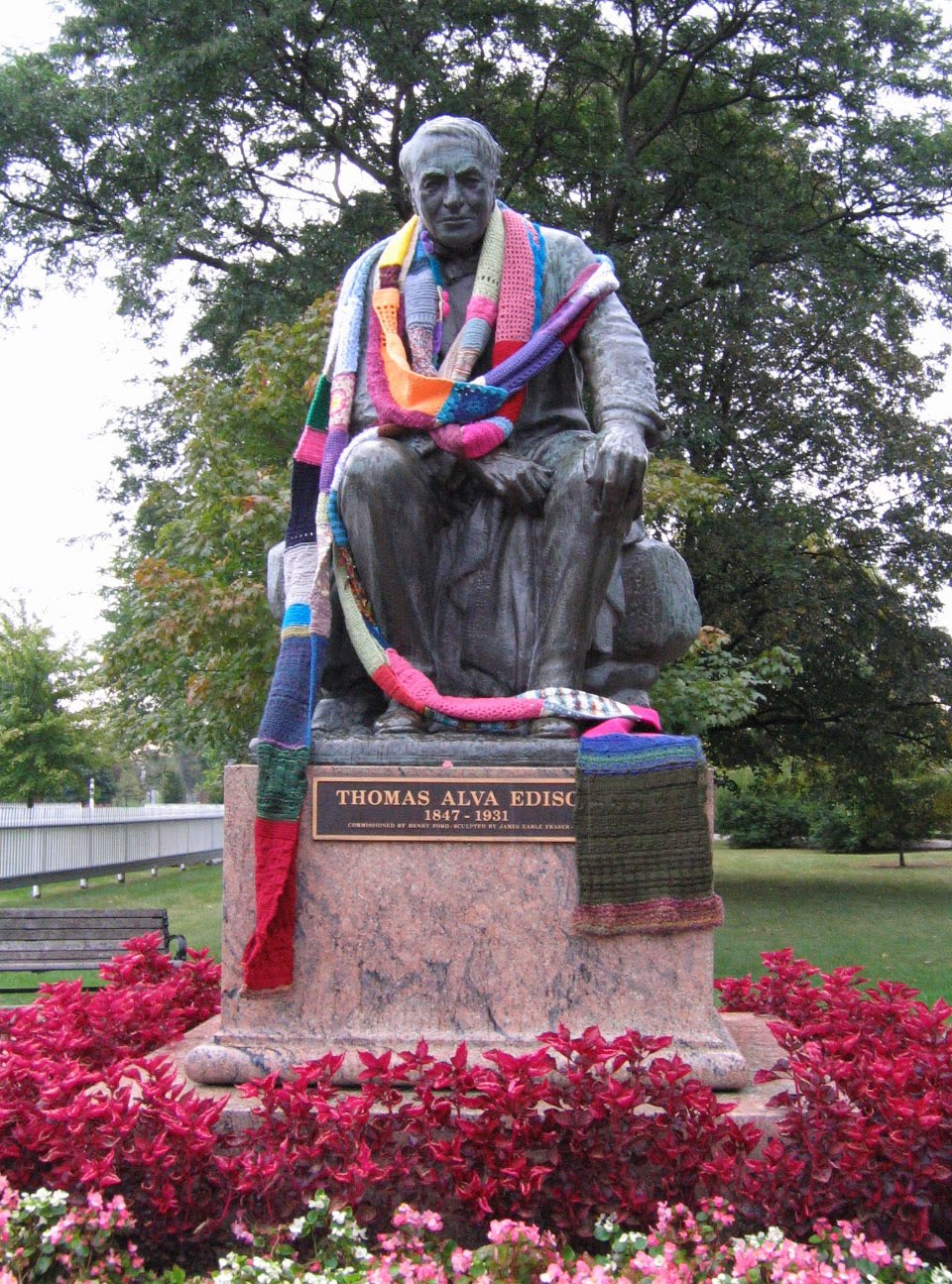 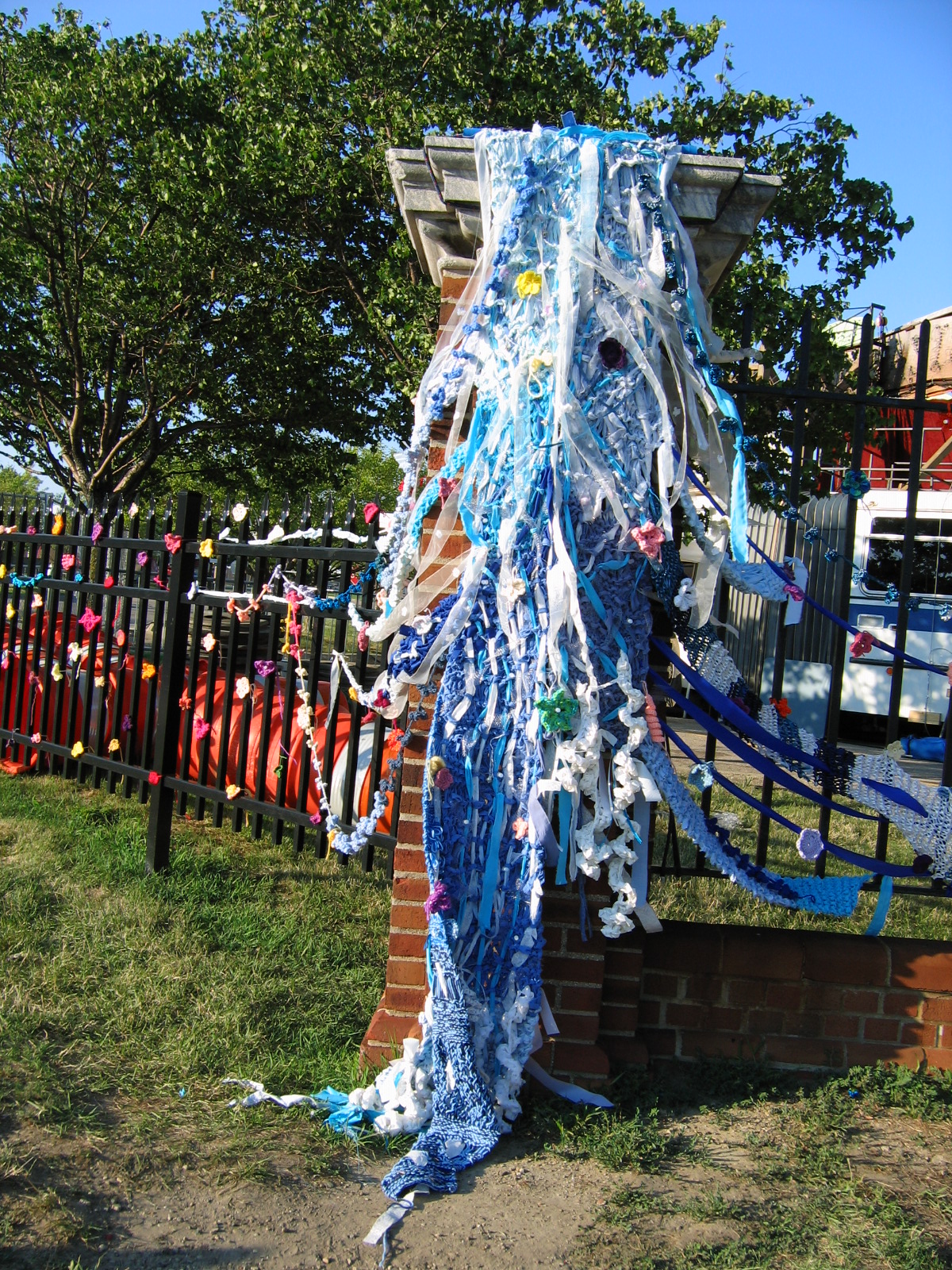 For Maker Faire Detroit 2012, I had on display various bookbinding techniques and also provided a free make and take to teach a simple three-hole pamphlet stitch. I also had the idea of people writing down on fabric "flags" what they would like to make and use the same stitch to secure it to a base. These "Maker Intention Flags", based on prayer flags, would then hang in my backyard. While the process changed, due to the sewing of the flag onto the base being too fiddly for newly inducted bookbinders, I still asked people to write down their Maker intentions on the flags which I then sewed onto the base. 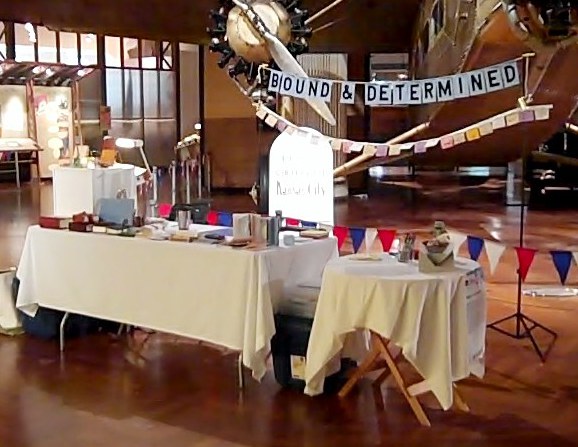 You can read more about the project at Maker Faire Detroit 2012 here and the finished project (at its beginning) here. 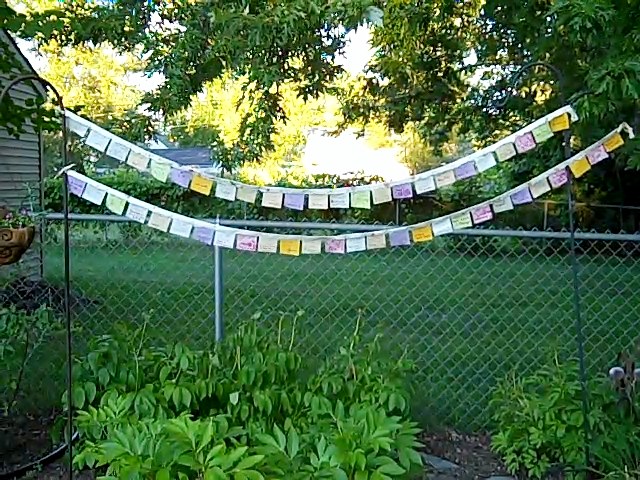 Maker Intention Flags at the beginning

The flags flew in my backyard for 15 months. They actually lasted quite well. Sure, the final product was faded and beat up and along the way I had to use clothes pins to attach it to the shepherd's hooks and where one line split in two, but for being 15 months in rain, snow, high winds and sun, I think it held up great! (Bonus real world testing: Tsukineko StazOn black ink held up better than Sanford Sharpie ink.) 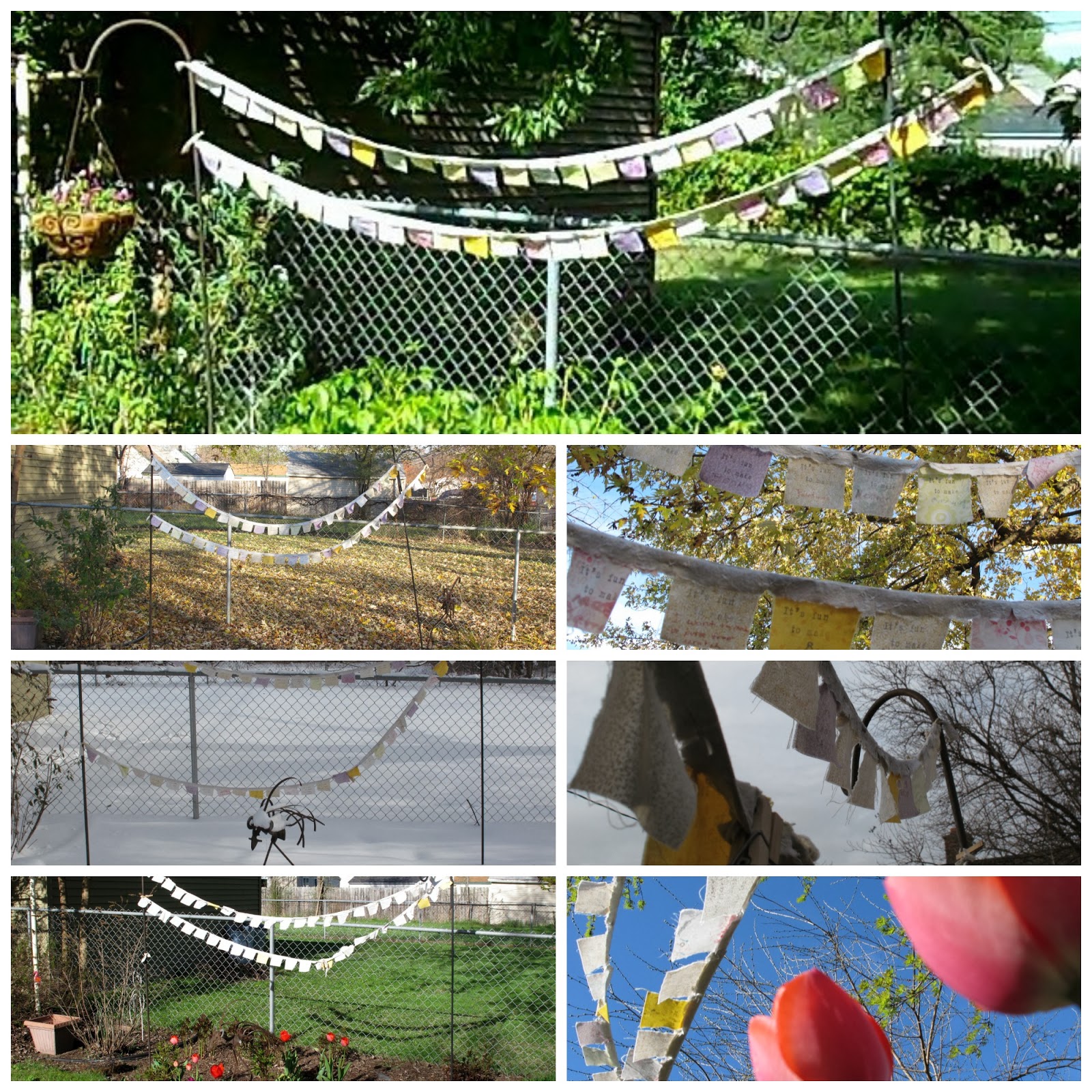 Maker Intention Flags through the seasons

And here are some close up before and after shots of the flags:

As with prayer flags, these Maker Intention flags were meant to fly for a while and then burned to release their "last expression" of intention into the universe. This past winter solstice I did just that. Despite the drizzling rain, the flags were burned on December 21, 2013 (later than I had wanted to as I remembered I didn't photograph the flags and was scrambling under less than ideal photographic circumstances.) 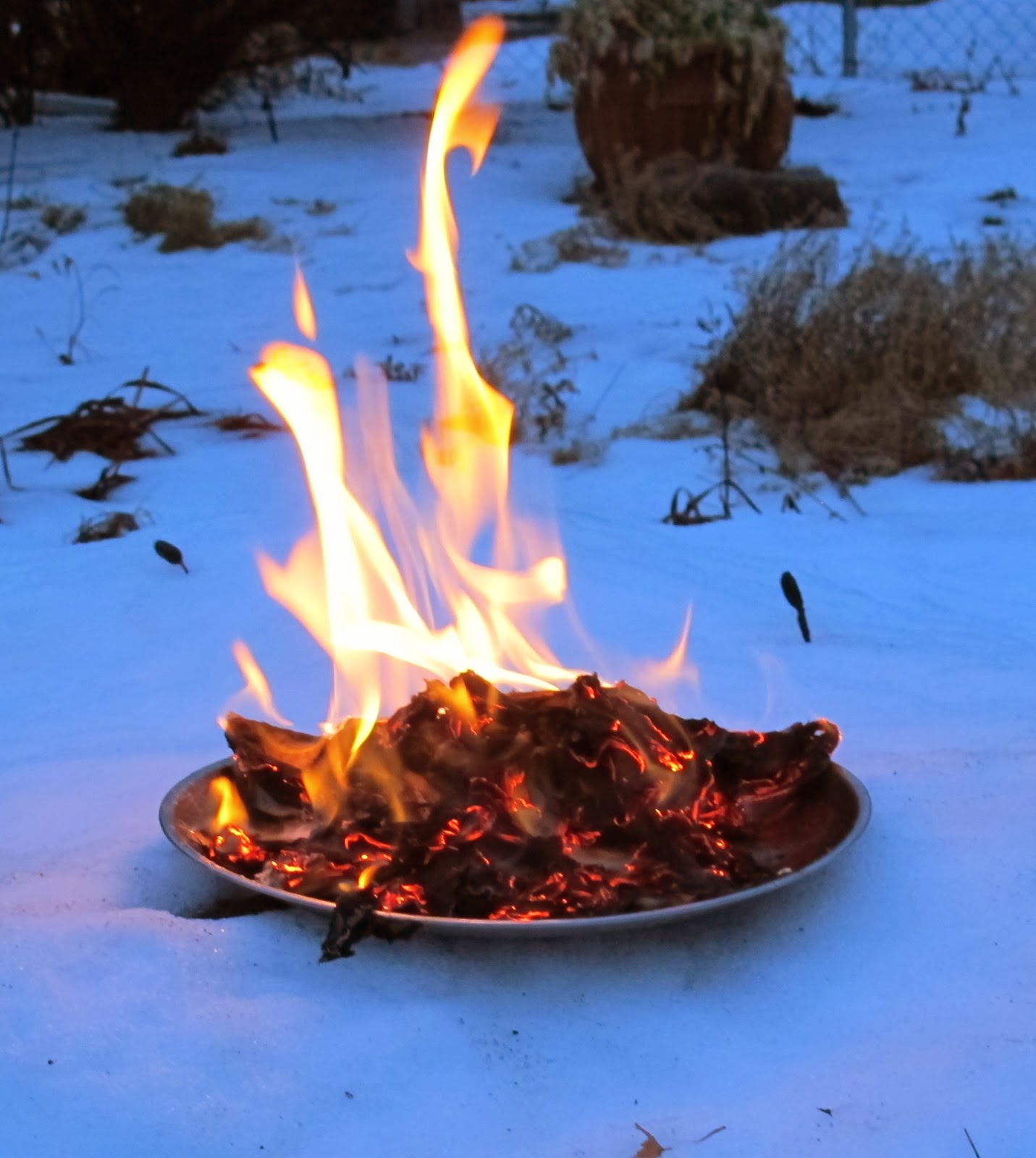 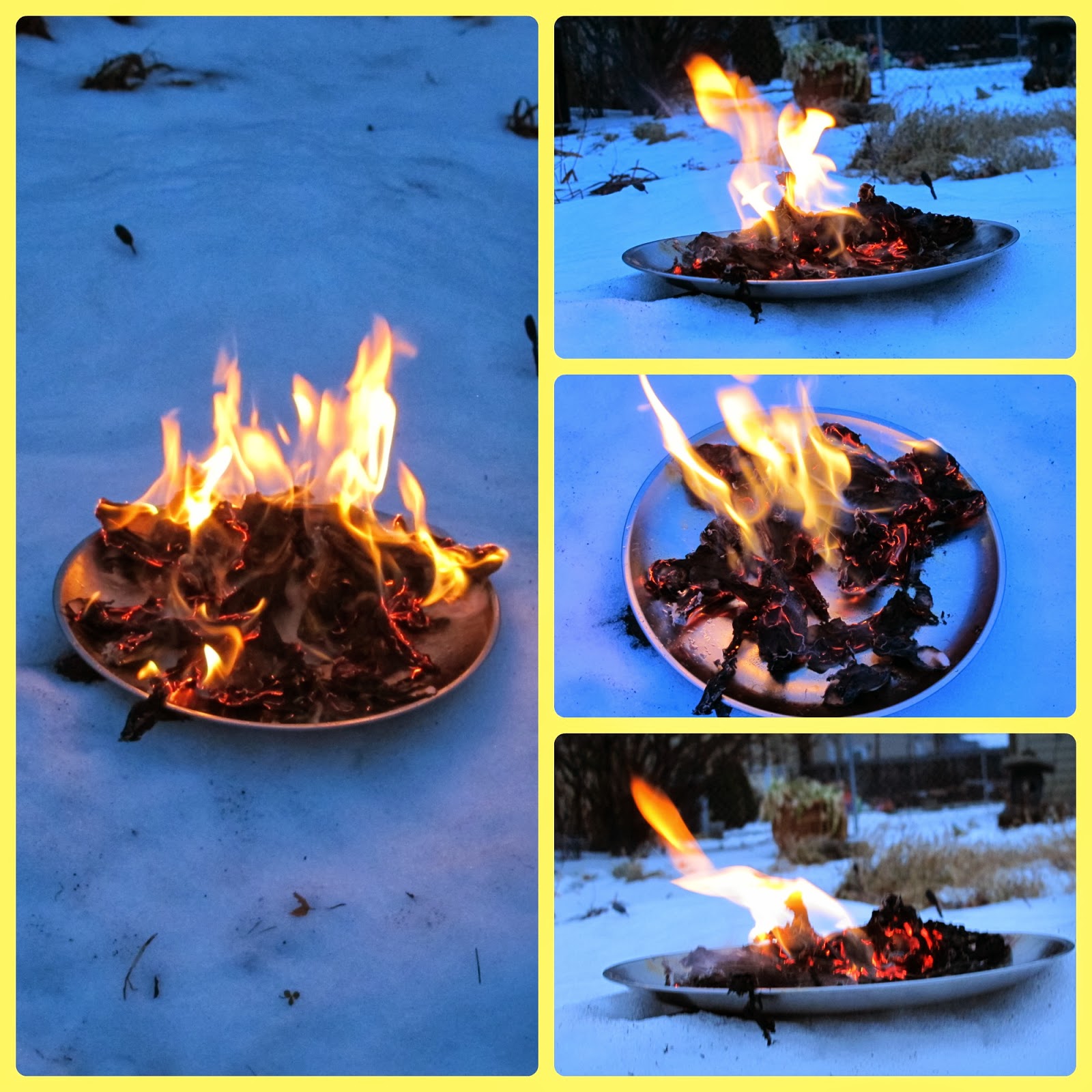 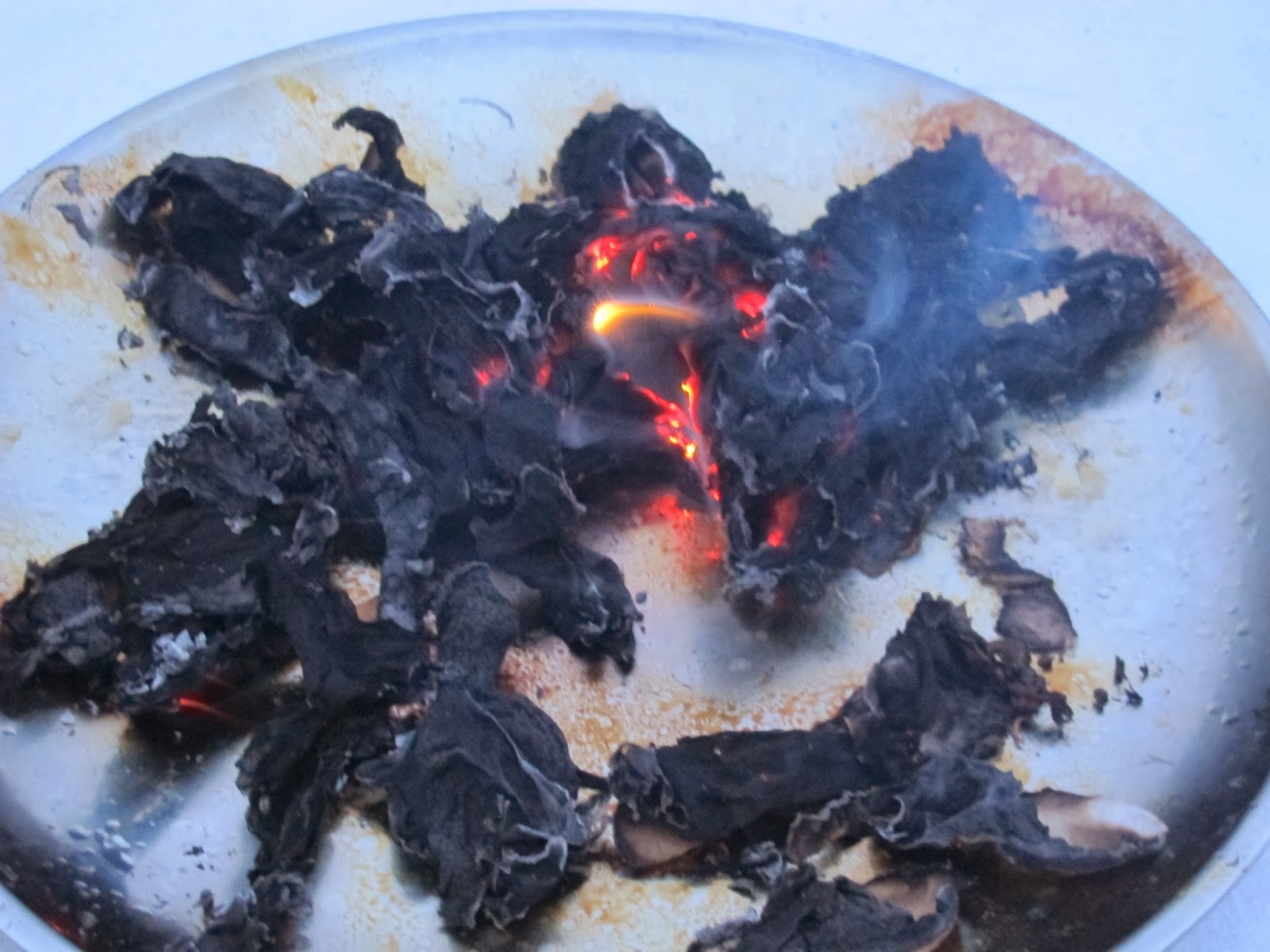 It is my hope that all the intentions will become (or have become/are continually becoming) reality. Even the zombie one. We all just need to make that first step, the step of intention, to start us on the journey. Intention leads to thought and contemplation which leads to ideas which leads to the urge to make. That, unfortunately, is where we can stall. Don't fight that urge! Make it! Even if it turns out crappy. Make another crappy one. Maybe you'll hate doing the process. That's OK. At least now you know. It's kind of like those cute shoes you want until you try them on and experience what foot binding must have felt like. Either try a different process or try something else but don't give up because the first time wasn't perfect or a transcendental experience.

Embrace crappy outcomes because they give you much more information and a better education. And then, like magic, you'll be making wonderful purses, origami, dances, apple pies, robots and, yes, even zombies because those first crappy outcomes composted into perfection and a transcendental experience!

Go make something! Start with an intention!