Even though my table at Maker Faire seemed to be off the beaten path, it was flanked by two awesome planes (which I neglected to get information about), so there was nothing to complain about. It even added another dimension to the project name of  "Bound and Determined". 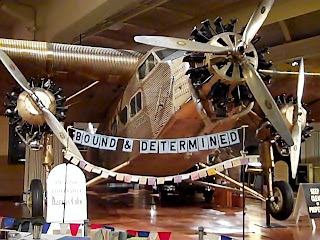 I met many wonderful people and was able to give several lessons on the three-hole pamphlet stitch in the free make-and-take. It was heartening to see the interest and I was impressed with everyone's sewing abilities! 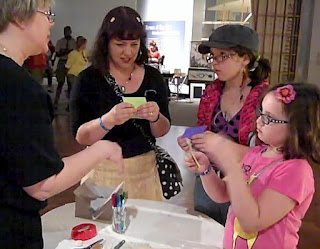 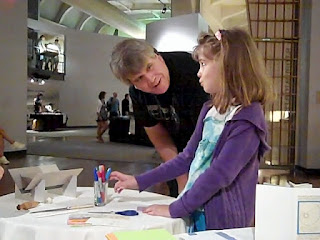 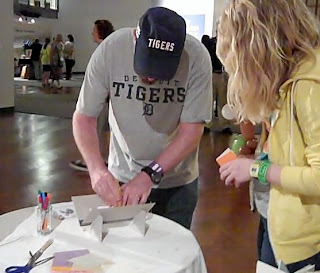 I had to adjust my plan for the Maker Intention flags a bit. When making prototypes at home, I spray starched the fabric (nine times (!) so it was stiff enough to act somewhat like paper) and then sewed it directly onto the paper "spine". However, it seemed that starching them in advance, along with the humid weather we had right before Maker Faire Detroit opened caused the fabric to lose its crispness. (We finally got much needed rain, a good news/bad news scenario because of Maker Faire.) This made it rather clumsy for the budding bookmakers to sew in. After the first three or four brave and undeterred (or should I say "determined", nyuk, nyuk) binders, I decided to have people just write their maker intention on the fabric and I sewed them in during and after Maker Faire. Apologies and kudos to those initial intrepid makers! 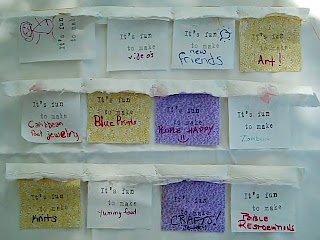 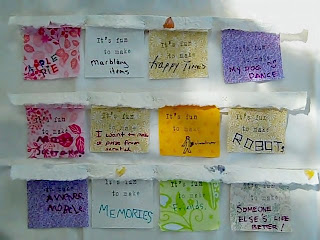 It was fun to see what everyone thought of to fill out the statement "It's fun to make ...". It ranged from the philosophical "sense" and "people laugh" to the practical "apple pie" and "small humans". Two people wrote "zombies" so maybe the "2012 is the end of the world" prediction might not be far off. However, the "stormtroopers" and "robots" will take care of them. 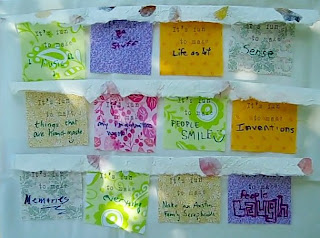 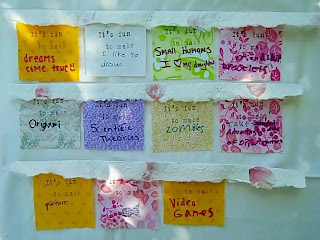 Many thanks to all who took the time to learn a new skill and engage in an art project that may or may not have made sense to you!!!!

Stay tuned to see the flags flying in my garden!
at 7:11 PM