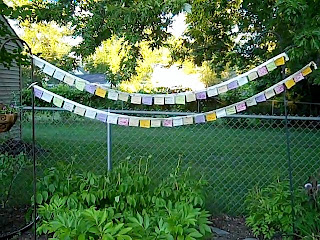 It didn't take very long to sew the flags in and then the "spines" together. I made a little cross stitch between each flag so the paper (that made up the spine) would remain closed and not flop open like my prototype did. 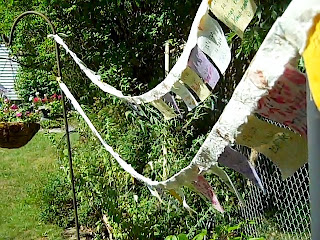 I waited a little while to hang to hang them outside because the weather was becoming unstable (a cool front! yay!) and I wanted to have them out at least a couple days before it might rain. So, after the front and rain came through, Sunday became the perfect day to unfurl the banner! 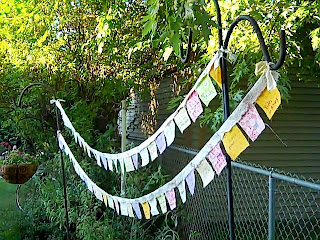 It was a windy day so all the intentions were able to be released as soon as the flags were hung! 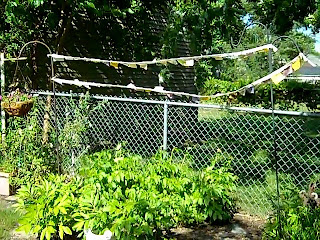 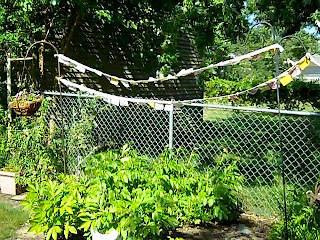 They look so pretty and it makes me smile knowing that people are so willing to be involved in new and different things. Even though I joked with people at Maker Faire saying the price for the free make-and-take was their involvement in the Maker Intention Flag project, even those who seemed a bit uncertain of the artistic concept were willing to become a part of it. I suppose you could say, "Well, you kinda backed them into a corner there." However, I think people want to be involved and want to be challenged and it gives me hope that they do. 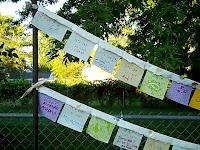 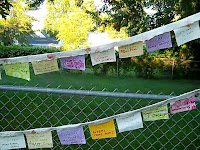 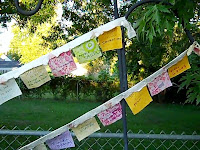 Hey! Look! I even tried my hand at uploading a video to YouTube and embedding it! (Don't laugh, it was my first time and I'm very excited.) Here's a short clip of the flags waving in the breeze:

Thank you Maker Faire and The Henry Ford for giving me an opportunity to spin (or perhaps I should say "sew") my madness and thank you to everyone who stopped by the booth to look, talk, give encouragement, give advice and/or learn a simple bookbinding technique. Above all, I am grateful for my good friend, Elizabeth Najduch, who encouraged me to send in my proposal and helped me out at the booth both days despite having to increase her car mileage by about 300 miles on Saturday. Thanks, Liz! (The animated gif was made for you because I know you don't have streaming at work. Another first! Enjoy!)