A few years ago, I began to see electronic circuits combined with textiles, known as soft circuits. I thought they looked cool but something I could never do. Then I took  beginning electronics and circuit board making workshops at i3Detroit, a hackerspace now in Ferndale, then in Royal Oak. 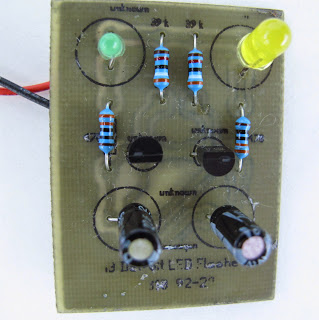 circuit made in workshop that produces LEDs to blink separately 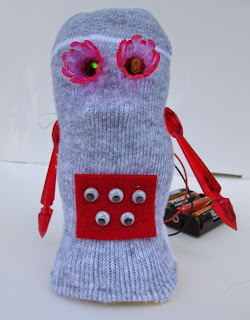 the robot I then crafted which uses the circuit made

Afterwards, I thought, I could never do this. It's no reflection on the wonderful instructors/members of i3Detroit, it's just that my brain has a hard time processing this type of information.

However, I still really wanted to work with this medium and I would read books on electronics and try my best to understand. I would drool over the soft circuit projects I saw and try to think of ways to incorporate the ideas in the book arts.

Then, about a year ago (maybe more), I saw a project done by Jie Qi at MIT under Leah Buechley, who heads the High-Low Tech group at the MIT Media Lab. She was working with circuits on paper and her final project was a book. WHAT??????? How f\/(king cool!

This renewed and revitalized my pursuit of learning and implementing. Again, there was much reading and clicking and "HTF did they do that" going on. Since I have a tendency to research things to death and then become overwhelmed which in turn makes me mentally paralyzed, I forced myself to just one, simple, stupid circuit to break this spell. 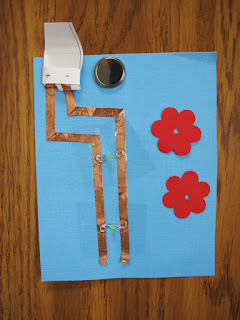 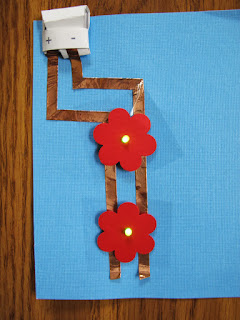 A simple circuit with two LEDs wired in parallel. And it works. See? Nothing to be afraid of.

This emboldened me and also proved something that I already knew, really, but chose to ignore. That is, you need to actually DO the skill you want to learn. So,  tried a couple more, just to play around. One failed to do what I thought it would but in turn, it gave me insight into how to do something else. 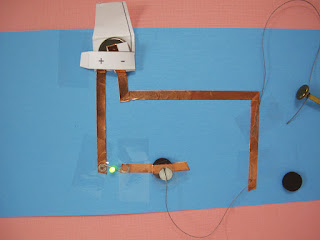 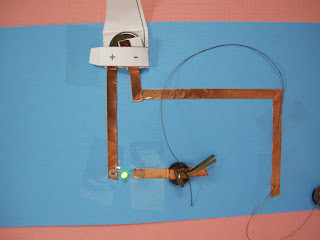 will just tying something metal with conductive thread work? yep, it will 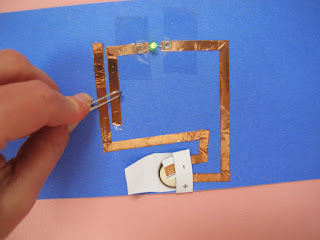 an idea that failed but look, you can use a paper clip 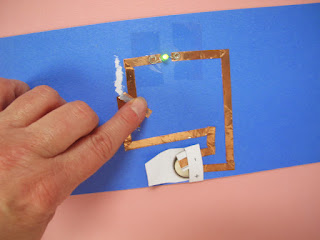 as well as copper tape

Admittedly, these are simple, basic circuits, especially to someone with a more mechanically based brain who knew this stuff in fourth grade. But to me, it's an exciting new world and my brain is coming up with all sorts of projects I'd like to try. I've started an idea book of ways to incorporate this in my book making. Some may work, some may work in a parallel universe whose laws of physics are different. I'm excited to be on this journey!