As unlikely as it may sound, it seems I can learn from my mistakes. The previous time I tried to put up a shelf, even though I thought I was doing everything right, the project went awry and quite a bit of swearing was involved. (Grizzly details here.)

Armed with past knowledge, I braved putting up another keyhole shelf in my kitchen. This time I measured several times the distance between the keyholes on the shelf and the marks to drill on the wall to make sure it was the same. Like last time, I even used an actual level so my items wouldn't go sliding off. When drilling, I was extra careful that I was exactly where I should be. (Note for future: drill a pilot hole first with smaller drill bit to have more control with larger drill bit. Note to Universe: why do I always find this type of information after the fact?)

Now, to be honest, this is where I would normally say "WTF??? I did all the right things and it still didn't work out!" However, the DIY forces in the universe were on my side and: 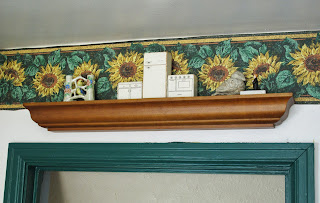 And to prove I'm not blowing smoke in your face: 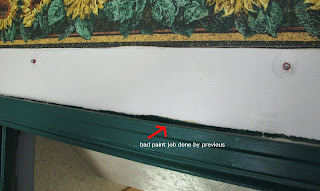 See! Just two holes! The way it should be!

And look!! The back of the shelf!

All in one piece! Not like some deranged woman attacked it with whatever sharp object was nearby to make it fit her mistake.

So, now I have another DIY skill in my arsenal! It's not like I never put up a shelf or did anything around the house in my life but I never did a keyhole hanger before and while it may seem simple minded to be pleased with such a trivial accomplishment, it's NOT! It's HUGE! So suck on that!

I think we should all be pleased with our accomplishments however small they may seem. We all become stuck and fearful of the unknown. We doubt our capabilities. I applaud anyone who tries something new, whether the final product is "successful" or not. The success is making yourself vulnerable and, in the process, learning something. It doesn't have to be a cure for wrinkles or a car that runs on grass clippings (hey, has anyone tried that?), just everyday accomplishments like how to make an omelet or sew on a button or put up a shelf.